Party Wall Agreements, referred to as Awards, are a legally binding document prepared by a Party Wall Surveyor for the benefit of both the Building Owner and Adjoining Owner(s). It sets out the way in which the proposed works are to be carried out and incorporates the resolution to any disputes that have arisen. Although it is not mandatory, we always advise that the Award includes a ‘schedule of condition’ of the adjoining property, so that there can be no uncertainties in the event that damage occurs during the works.

The Award provides the Building Owner with the right to proceed with the proposed works under the Party Wall Act, whilst also ensuring the works are carried out in such a way that protects the interests of the Adjoining Owners. The Award also gives details of the building contractor and agreed access and working hours. The Award is sometimes referred to as a Party Wall Agreement.

Non-compliance with the Act, such as not serving notice or failing to resolve matters by way of an Award, is a major risk to take. Your building works could be delayed or declared unlawful, and you could face legal claims and costs.

Once the Award has been served there is a period of 14 days in which either party can make an appeal. The appeal has to be heard in the County Court. If there is no appeal, the Award becomes legally binding and the specifications cannot later be challenged.

Home-Approved can provide a knowledgeable Party Wall Surveyor to ensure that any planned works comply with the Party Wall etc Act 1996. Meet our team or call us on 0800 980 3113 or request a call back. 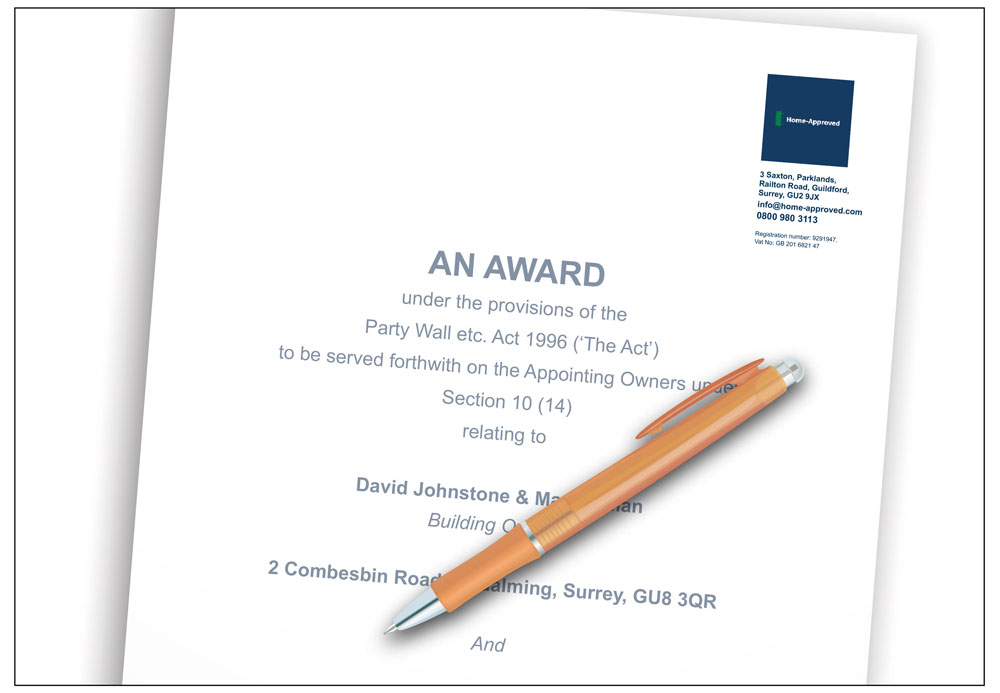 Party Wall Agreements are called Awards and are issued under the provisions of the Party Wall Act 1996.